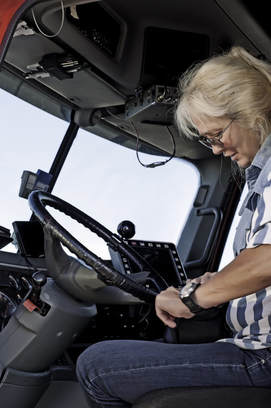 CAN BLOCKCHAIN CREATE A SMOOTHER RIDE FOR TRUCKERS?

Posted on October 11, 2017 Published by Sententia Partners Leave your thoughts

The perennial problem of truck driver shortages is back with a vengeance. Technologies such as blockchain could help fix a problem that puts a brake on the U.S. economy.

They are not exaggerating.

Trucks transport more than 70% of all the freight tonnage moved in the U.S. To move 10.5 billion tons of freight annually requires more than 3.4 million heavy-duty trucks and over 3.5 million drivers, estimates ATA.
​
Drivers are in short supply for a variety of reasons. Wages in the business have not kept pace with other industries while costs have increased. Other factors include extended periods away from home, the stresses and strains of meeting ever-tighter delivery windows, and a general lack of respect for the profession. Drivers also must contend with tighter regulations governing their hours of service.

Technology can’t solve these problems – but it can make truck driving more palatable and perhaps slow the flight away from hauling freight as a career by freeing up drivers’ time.
“Think of a driver’s time as that of an hourglass, a perishable commodity which is continually diminishing,” says carrier J. B. Hunt in its white paper 660 Minutes: How Improving Driver Efficiency Increases Capacity. As the white paper explains, drivers can be “on duty” for 14 hours with a 30-minute break. Of the 810 remaining minutes, 660 can be spent driving. That leaves just 150 minutes for all the other activities that engage drivers.

In today’s logistics industry, 150 minutes gets eaten up fast. There are routine tasks to perform such as picking up loads and completing safety inspections. If an inefficient freight facility messes up its appointment schedule, a truck could be idled for hours waiting for a load. Arriving late at a facility owing to unavoidable traffic delays can have the same outcome.

Technologies such as blockchain that reduce or eradicate supply chain inefficiencies can help drivers avoid these time-consuming diversions. For example, a blockchain-based freight information system that alerts every relevant party in real-time when a truck encounters a delay or a terminal becomes congested could enable drivers and managers to take corrective action. At the very least, bad actors such as underperforming freight terminals that repeatedly delay trucks would become more visible.

Connecting drivers into these real-time freight management systems as active participants could also improve the image of driving as a profession.

Ultimately, self-drive trucks promise to solve the driver shortage crisis. But it will be a long time before fully automated rigs are barreling along on American highways.

Meanwhile, blockchain in combination with other technologies could make freight transportation an easier road for truck drivers.