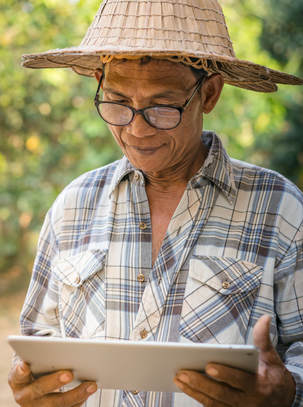 TRACEABILITY TECHNOLOGY IS BRINGING SMALLHOLDERS OUT OF THE SHADOWS

Posted on March 27, 2018 Published by Sententia Partners Leave your thoughts

As someone who struggles to remember names, the notion of remembering 380,000 seems other-worldly.

In a recent company announcement Starbucks’ Director of Traceability, Arthur Karuletwa, says: “since its beginning, Starbucks has known the names of the farmers within its supply chain, including the more than 380,000 farms it worked with last year alone.”

Of course, Starbucks has a high-powered IT system to keep these names on file and retrieve them when necessary. But the broader point is that not every company is as diligent about maintaining relationships with small-sized suppliers. For many companies, myriad small supplier farmers and manufacturers tucked away in remote areas of developing countries underpin their operations yet are largely anonymous.
​
Think of each smallholder as a pixel in an intricate supply chain picture. If many pixels are hazy or invisible, the overall picture is blurred. It’s very difficult to get a clear idea of what is going on when the image is unclear. In other words, it’s difficult to achieve high levels of traceability and visibility when a large portion of the supply chain is ill-defined.

That’s changing as distributed ledger and other technologies make it possible to connect with large networks of suppliers and track them individually, and consumer demand for supply chain transparency becomes irrepressible.

Starbucks has launched a pilot program with select coffee farmers in Costa Rica, Colombia and Rwanda to “develop next-level data technology to log and share real-time information along the journey of coffee beans with the aim of driving positive impact to smallholder farmers within its supply chain.”

The Starbucks pilot will use “traceability technology” – or blockchain technology – to take bean-to-cup transparency to the next level. And the coffee retailer will make the results of its two-year pilot publicly available.

A key component of the system is smallholders’ cell phones. As Karuletwa points out, even farmers with very few possessions he’s met had mobile phones.

Starbucks is by no means alone in the movement to bring smallholders out of the shadows.

In March this year, Sourcemap, a specialist in supply chain mapping, started a door-to-door census of every garment factory in Bangladesh. Local data collectors equipped with mobile apps are amassing thousands of GPS-linked data points collected on the ground from factory owners, workers and organizations.

Again, the overarching aim is to bring clarity to a convoluted supply chain.

Says Sourcemap, the garment industry employs about four million people in Bangladesh, but most of the workers who report to factories are invisible to the supply chain – and to the multinational brands that purchase the products fashioned by their hands.

The project, claimed to be the first of its kind, will create a digital map of the country’s garment industry. Data on factories, workers, products and the brands that rely on the industry will be uploaded on Sourcemap cloud servers and made visible to the public.

Sourcemap also has teamed up with Bluenumber, an independent registry of digital farmer and worked identities, to develop a source map that shows where and when palm oil is sourced.

The palm oil supply chain is highly fragmented. Smallholder farmers sell their produce to middle men and agents, who supply mills where the fruit is processed. Traders then transport the milled fruit to refineries for further processing. Beyond this maze-like supply chain sit multinational companies that buy palm oil as an ingredient in multiple products.

The lack of transparency coupled with palm oil’s association with issues such as deforestation and human rights abuses, has created an urgent need to illuminate the supply chain.

The Sourecemap/Bluenumber project uses proprietary technology that includes GPS-enabled data collection apps and unique identifiers to identify smallholders, estate workers and facilities at every stage of the supply chain. Again, the data will be available on a digital platform.

This February a major user of palm oil, the multinational food manufacturer Unilever, announced it had become the first company to share information about its suppliers and the mills that process the palm oil products it buys. The company has initiated an extensive mapping exercise of over 1,400 mills and more than 300 direct suppliers. The project is “a big step towards greater transparency,” says the company.

Such projects also represent a big step towards greater accountability, as technologies such as blockchain shine a light on the countless smallholders that feed global supply chains.

Unilever CEO Paul Polman alluded to this broader benefit during a panel at this year’s World Economic Forum. “A lot of people think that if you outsource your value chain you can outsource your responsibilities. I don’t think so,” he said.